Give a Little Love…

This week I completed the longest training walk I have and will undertake before the Mind 3000s.  Moorlinch to Shapwick, to Ashcott, to Ham Wall, to Glastonbury, to Street, to Walton, to Ashcott, to Pedwell, to Moorlinch.  I began at midday and walked and walked and walked until just past 8pm.  I felt unpredictably OK when I got home. Not walking-on-sunshine, skipping-down-the-street OK – my knees were hurting and the balls of my feet felt like I was walking on pins – but not like I was going to collapse if I had to take another step.  I kept expecting to hit The Wall but it didn’t happen.  I managed to stay buoyant and positive and my pace remained pretty constant.  I think I might have slowed in the last 5 miles or so if I hadn’t been worried about getting home before it got dark, as I was walking alone and did not have my head torch or fluorescent tabard.  (Yes indeed, you read that correctly – I have a fluorescent tabard and I’m not afraid to use it.)  My pace also quickened considerably about a mile from home when a two rather frisky cows started running towards me half way across a field. OK, I admit it, I ran. I know it’s the worst thing to do, and this was proved by the whole herd joining in the jolly game of running towards the petrified human.  Thank goodness I wasn’t too far from the stile. I have never been so relieved to have a large hedge between me and some cows.

The idea for the route of this walk began as a moment of desperation on a previous 18 miler a few weeks ago.  I was really struggling at one point quite close to home – I needed the loo, I was knackered and my hips were hurting with each step – I thought how nice it would be to see a friendly face.  Then, just as I was having to really grit my teeth, the song “You Give A Little Love” from Bugsy Malone came on my iPod.  This is a little bit embarrassing. In order for the conception of my ‘Give A Little Love’ walk to be properly explained, I have to admit that I have actually bothered to import this song onto my iPod.  Don’t judge me. Just accept me as I am, Bugsy Malone and all.

So, on this 18 miler, I was suddenly smiling to myself and doing a little Charleston as I walked along and it made me think of how nice it would be to go and visit some friends as part of a training walk, to break up the monotony and to keep my spirits up.  So many people have been supportive of my training for the trek.  I then started thinking about support networks, and how incredibly central my support network has been and is to my wellbeing.

One of the most painful and difficult thing which I have experienced as part of my grief is the disintegration of some friendships.  Suicide is so complex and so multi-dimensional and some friends just don’t know how to deal with it.  At times, this has been nothing short of shattering.  I turned their inability to support me in on myself, and my self-esteem and self-image became very poor. At times, the negativity would take over and I would become certain beyond any doubt that my friends’ lack of contact was a reflection of what an awful, unlikeable, dreadful person I was.  It truly fuelled my depression and made me feel that making new friends was impossible as I had nothing to offer.

I don’t want to dwell on that side of events for now – perhaps this is a subject for another blog at another time. I feel I have gone through a very long process now which has resolved things in my mind.  They are not bad people, they just aren’t the friends I believed them to be.   The positive side of this experience is that where I felt so abandoned by a minority, I found that my true friends were illuminated.  Granted, there may have been fewer of them than I’d thought, but the ones who have remained are truly friends for life.  Many of them will never know how much they have helped me, by being normal, by being available, by not crossing the road when they saw me, by allowing me to talk, by not ignoring the elephant in the room, and by hearing Ian’s name without flinching.  Support isn’t just about having intense conversations which explore deepest and darkest feelings, although that is a distinct part of it.  Sometimes support is just doing something normal and having a normal chat about inconsequential things, even when you’re in the depths of despair. It is not necessarily about having all the right things to say, or making profound statements. It’s about standing by someone’s side, acknowledging the difficulties, and just being kind.

I started thinking about how I could let people how they had helped me and how absolutely vital this has been in lifting my depression.  And so, my “Give a Little Love” walk was born.  It was to be my final long training walk before the 3000s and I decided I would turn it into an event – a walk between my local friends’ houses to drop them a note to say thank you for being part of my support network.

I moved to the village where I live now only 9 months ago, so many of my friends here are quite new.   Although they are new friends, the fact that they have welcomed and included me at a time when I felt it was impossible for me to make friends has been invaluable.  It has helped me move on from the difficulties of losing old friends and made me feel that I am part of a new community.  It has been both a physical house move and an emotional moving on. It could have been a very different experience, and I wanted them to know that.

As for my older friends and family members, many of them live many miles away; too far to walk – Denmark… the States… Lincoln.  So I decided that as well as walking to my local friends’ houses, I would send cards in the post to my more distant friends, to include them in the walk and to Give a Little Love to them too.  I wanted it to be an event which allowed me to train alongside thanking all the people who have helped me so much with my own mental health, and since Ian’s death, and have enabled me to get to a point where I am motivated and engaged enough to even think about walking 22 miles.

I wrote 40 postcards to friends and family and posted the ones necessary with strict instructions to open them after midday on May 3rd, at the time I would be walking.  My local cards were in my rucksack and as I set off on the walk I felt really good about this rather extensive delivery.  In the true spirit of an event to celebrate support, my mum and sister stayed at home to look after my children while my dad and The Lovely Joe came with me for the first 4 miles, until they had to turn back. I noted that for much of these 4 miles I walked slightly ahead of them. I kept looking backwards to check that they were still there – and they were, walking steadily, just behind me.  Much like in life.

I received a number of texts while I walked from friends who had opened their cards and sent me words of encouragement and love. Friends from Denmark and Essex called me, and I sadly missed a call from a friend in the States who wanted to wish me well from across the pond.  I had banners on front doors to cheer me on; cakes, grapes and satsumas left for me. I dropped in on friends to gave me paracetamol, filled my water bottle and let me use their loo.  A friend who had seen my Facebook post from half way through the walk drove past me a few miles from home and stopped to say hello.  When things were tough going I looked at my texts, emails or thought of my loved ones and what was a potentially painful and hard going experience turned into a genuine pleasure.

And then, after all those thousands of steps, the texts and phone calls, the friendly faces, the herd of cows and the appearance of a large blister, I got home.  I got home to the people who are at the very centre of my support and of my world – Joe and the kids.  They will be getting their cards on the day when I climb the mountains.  The kids are too young to understand at the moment but I want them to know, when they are old enough, that they have kept me going on the darkest of days, just by being.  And Joe… the patience, love and steadfastness of a guardian angel.

Support networks – in whatever form they take; professional, informal, extensive, or intimate – improve mental health. FACT.  In amongst all the difficulties and the trauma, I know I am a lucky, lucky girl to be surrounded by such love.  It’s this support which will get me up the mountains.  With 2 weeks until the trek, I’m ready to go….

You give a little love….! 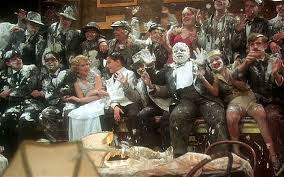